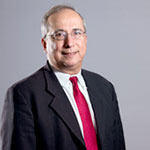 Greg Aftandilian is an independent consultant, writer, and lecturer, having spent over 21 years in government service, most recently on Capitol Hill. He was foreign policy advisor to Congressman Chris Van Hollen (2007-08), professional staff member of the Senate Foreign Relations Committee and foreign policy adviser to Senator Paul Sarbanes (2000-04), and foreign policy fellow to Senator Edward Kennedy (1999). Prior to these positions, Mr.Aftandilian worked for 13 years as a Middle East analyst at the U.S. Department of State where he was a recipient of the department’s Superior Honor Award for his analyses on Egypt.